Escape the one of the world’s most notorious prisons? Pft, easy, do they know who we are? We’re branded merchandise specialists.

Ever taken on a disgruntled ghost and pieced together the puzzle to escape your hostage situation? Well, we don’t do it often here at MoJo (in fact we’ve only done it once) but with MoJo Monday fast approaching we knew we needed to test ourselves again. Escape Reality offered us a everything from finding our friend in a fog shrouded city filled with evil forces to escaping the world’s most high security prison: Alcatraz. Loving a complex challenge, we chose the Alcatraz room. Escape the one of the world’s most notorious prisons? Pft, easy, do they know who we are? We’re branded merchandise specialists.

Due to prior commitments, Dave, John, Matt, Kyra and Sally couldn’t make it. That meant the rest of us had to up our game and rise to the challenge. The Alcatraz crew headed out as the clock struck 5:15, stalking towards Escape Reality like the top class criminal masterminds they were soon to become. Once at the venue, we were shown to the room and the rules were explained as we stood outside the door drooling like hungry hyenna’s, keen to challenge ourselves. Upon entering the room we were split and locked inside our cells, with no idea how to get out.

As the true criminal’s we were trying to be, we waited until our captor had left us unattended before we tore the room apart like a pack of wild savages, keen to find anything that might aid us to escaping. After a few minutes of discussing with each other the contents of our rooms, we found the keys to escape our cells and found a door at the back of one room, that would surely lead to our escape. We prized the key from its cage and shot through the door. Channelling our inner Sherlock, we pieced together the puzzle to the next room and we were in to our third, and final, room.

The stakes had been upped and we had to use all of our resources and brains as we scrambled together like a bunch of disgruntled orangutans trying to work their way out. We could practically smell freedom but the clock was closing in on us fast. As we reached the last puzzle we had mere minutes left to complete our escape and panic had set in. Freedom was so close we had become delusional on the high of escaping and focus had escaped us. We were so close yet so far. We still had to figure out the final clue!

As the clock struck 58 minutes, hope had started to fade and fear had set in. But Tom’s mind flickered to life with a last dash of hope and a new approach to the problem. We bashed the key in and the door released! We had conquered Alcatraz and avoided being locked away forever. We were heros! Even if only among the criminals…. 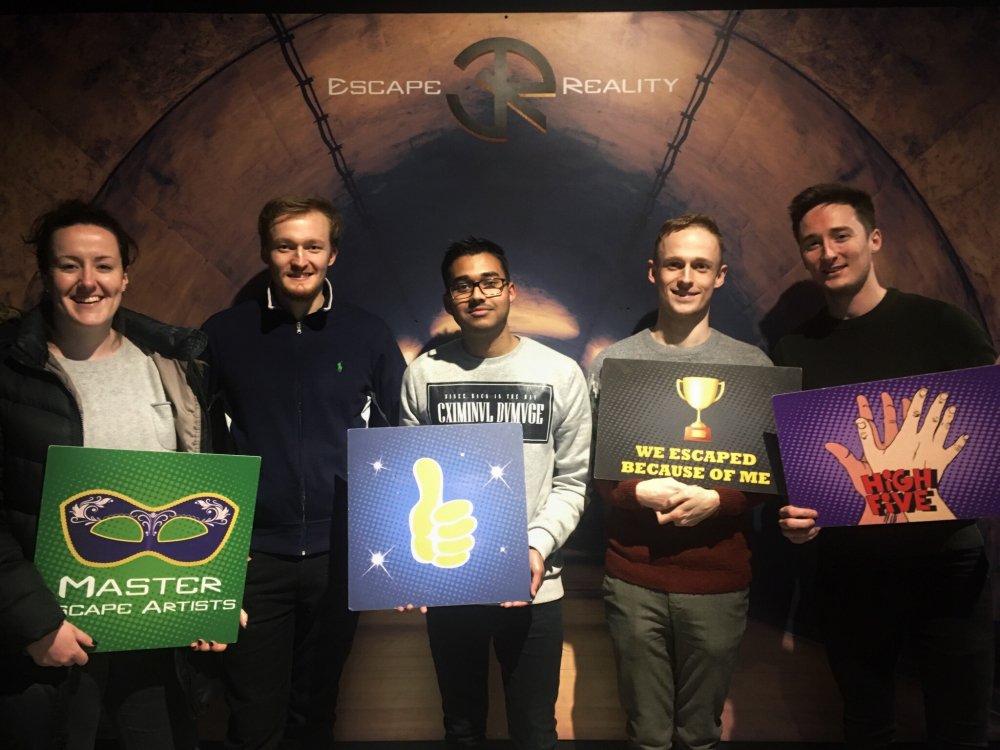 We headed back downstairs, grabbed our stuff and after a quick escape snap, we headed out into the evening (which was still light!) and parted ways as more than mere work colleagues. We parted as infamous criminals, conquerors of Alcatraz and masters in the art of escaping.