MoJo's turn of a decade

Scaling the Slippery Walls: The date was booked, and for the event, we set up a Gorge walk in the Peak District.

MoJo recently hit the grand age of 10 and to commemorate the occasion of reaching double digits, we knew we wanted to celebrate with something unique, something fun, something very MoJo.

The idea was simple, in principle, find a Saturday everyone in the team was available for and then book something active and fun. However, in our naivety, we failed to remember that everyone does have a life outside of the office. Trying to find a Saturday where everyone was free was like trying to find Where’s Wally, except imagine you were blindfolded, and the book was in an unlit room.

After setting up documents, calendars, and being just shy of carving everyone's yearly cycle into a rock-face, Tom Hanks Castaway style, we managed to pin down a Sunday where the only absence would be Dane (who was living it up at a Sausage & Cider festival).

The date was booked, and for the event, we set up a Gorge walk in the Peak District. This quest entailed walking through a gorge, traversing waterfalls and dodging stinging nettles as if we were leaping over barrels in a game of Donkey Kong.

Foolishly, after choosing a 10am slot for a 2 and half hour drive, we woke up early on the Sunday and met at the office. Most looking tired, and lacking sleep, we set off, with a quick pit stop at McDonalds, where we ordered a Sausage McMuffin in honour of Dane who couldn’t be with us!

We arrived, with the sun shining, and met our instructor who promptly handed out our wetsuits. We slowly got into them to get prepared and the end result was hysterical. Like having to wear an emergency PE kit because you forgot your own, each person’s wetsuit was either too large, too long, or not long enough! People would have crossed the road to avoid us, had there been any souls around the peak district to witness our Rocky Horror Picture Show-esque, wetsuit attire. 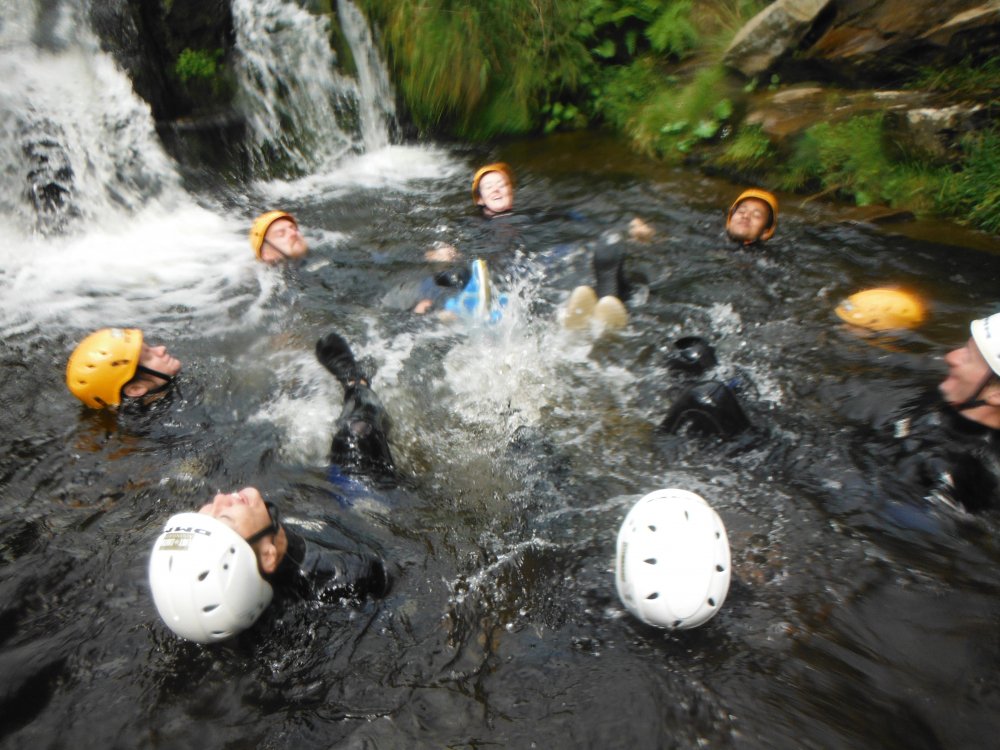 However, putting that behind us, we made our way into the gorge and it was sublime. Like being in Jurassic Park, the hills rose to both sides of us leaving the only path to be the rocky gorge. We stopped along the way at pools to bathe in, or to water bomb in, obviously seeing who could create the biggest splash. It would not have been a MoJo event if there wasn’t at least some competition.

After two hours of traversing rocky ledges, helping each other balance through waist high streams, and climbing a waterfall with nothing but a rope and a drive for not wanting to die, we had come to the end of an enjoyable, sun filled day.

The pub became the next pit-stop, with beef and beer lashing around the table before heading home to enjoy the rest of our Sunday in the driest, most comfortable place available, like the couch.

It was a wonderful day, perfectly suited to celebrate such a milestone in MoJo’s history. For 20 years, we cross a Volcano top on a tightrope, wearing only flip flops. It’s good to have variety, right? Until then, keep your eyes peeled!