The Bog, the Whole Bog & Nothing but the Bog

Part 2 of the Mojathlon: Most people like to spend their Bank Holiday weekend relaxing and enjoying the extra day away from work. However, here at MoJo, we get our kicks by jumping into freezing cold bogs and snorkelling around. 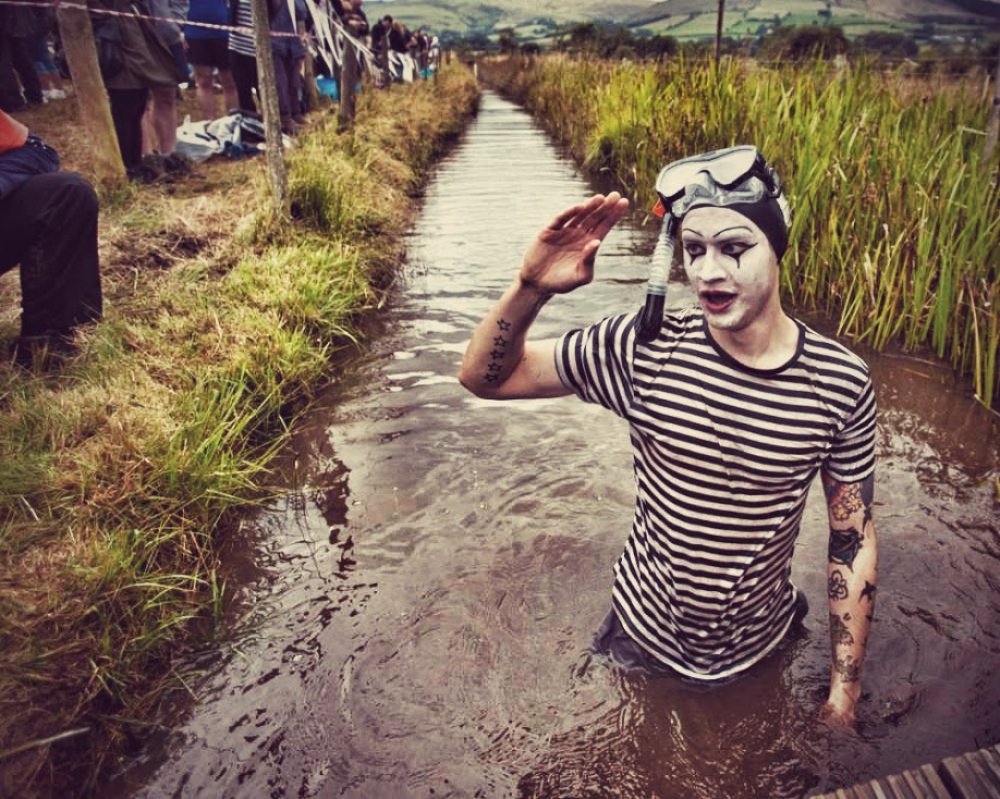 That’s right! This weekend saw the MoJo team take part in the World Bog Snorkelling Championship as part 2 of their Triathlon in order to raise money for local Leicester charity LOROS.

We set off from Leicester on Saturday to accomplish the 4 hour drive to Llanwrtyd Wells, the home of the ‘World Alternative Games’ and World Bog Snorkelling Championships. The journey was made even more interesting by the Sat Nav’s ability to take us through several tolls and scenic roads, which certainly gave the drive some character!

We arrived to watch the sun go down on the Saturday night outside our tent before venturing out for some Pub Grub in the smallest Town in Britain (fact!). There was a real sense of community and camaraderie in the air as everyone in the Town was talking about the games and some of the other events that had taken place that day.

After befriending some Australians and New Zealanders, burning a multipack of Crisps on the fire and stealing Darts from a nearby Pub, we hit our sleeping bags to prepare for the next morning. Upon waking, we donned our Mime outfits (with the exception of John, who resembled something close to the Joker/Your Worst Nightmare) and walked to the World Bog Snorkelling Championships.

Fear enclosed us immediately. The bogs looked cold and the people getting out of the bogs looked even colder. We knew that this was going to push our bodies to the limit. The Bog was a 60 yard trench, filled with the brownest water you have ever seen. The challenge involved swimming two lengths with a maximum of 2 minutes allowed per length.

After registering our names, we had a 2 hour wait, which allowed the fear to grow and worsen. Soon, “David” echoed over the speakers, with “Hannah” and “John” following shortly after. The flippers went on, alongside the goggles and snorkel and one by one we stood on the edge of the Bog peering down at the water.

David went for the ‘jump in and get cold quickly approach’, while Hannah and John went for the classier - ease yourself in slowly - option. The water was colder than anything we had ever experienced. The cold gripped you immediately and your muscles soon tensed up. The whistle was blown and the freezing water engulfed us as we lowered our bodies and heads underwater. At this point, visibility was reduced to zero.

Your body wanted you to breath quickly to replace lost energy, but the snorkel made it difficult, which resulted in a fight for breath. It also felt like you were in the water for forever. What was 120 yards, felt like 120 miles...but we survived! With David coming in 1st with a time of 2:32, Hannah following with 2:50 and John rounding of The Musketeers with a time of 3:04.

It was a fantastic, very difficult experience and Team MoJo are glad to have pushed ourselves to the limits in something completely different to the 1st Bike event. We even made the news! We now turn our heads to October, where we will finish of the Triathlon with our running segment. Fleeing from Zombies and trying to survive a 5K run.